James Baker as a Master of Negotiation: Tax Reform

Watch this video clip from the documentary to learn more about how Baker worked with both Democrats and Republicans to promote tax reform. As you watch, ask yourself:

Negotiations require an artful balance between giving and taking — each side must yield a bit in order for everyone to reap some benefits. But the best negotiators don’t just focus on their own agenda; they also consider the wants and needs of their opponents. James Baker believed strongly in understanding the person across the table from him — and in trying to solve that person’s problem. Baker’s careful attention to opposing points of view and his willingness to compromise allowed him to solve problems that others considered insurmountable.

In the mid 1980s, tax reform was one of the seemingly impossible tasks that Secretary of the Treasury James Baker undertook for President Ronald Reagan. At issue was an extremely complicated tax code. Republicans wanted to cut taxes, but Democrats were wary of the Reagan administration’s concept of tax reform.

Baker approached the project by reaching out to Democratic Representative Dan Rostenkowski. As the powerful chair of the House Ways and Means Committee, Rostenkowski knew the tax code inside and out. Politically, the two men were at opposite sides of the table, but Baker knew that if he could work out a deal with Rostenkowski, the Democrats would agree to the plan.

After months of negotiations, Baker and Rostenkowski were finally able to settle on a plan to which the House Democrats would agree. But just as it looked like tax reform might pass, House Republicans balked. They complained that Baker had conceded too much to their opponents.

Baker knew that concessions are a natural part of any negotiation. He spoke with President Reagan and urged him to lean on the House Republicans. With Reagan’s help, the tax reform bill passed. It had taken more than a year of negotiations, but Baker and Rostenkowski had managed to craft a bill that both parties could agree to pass. Baker’s reputation as a master negotiator was solidified.

In this activity, students use a cost-benefit analysis activity to move through the process of making real-life choices. This process helps them to develop an understanding of the influence of positive and negative incentives on their decisions. 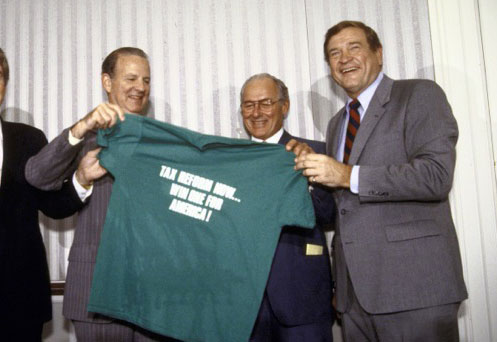 When Ronald Regan chose Baker as his chief of staff in 1981, the president made it clear that he also wanted his long-time friend and aide Ed Meese to share some of the power of the position. It was up to Baker to negotiate with Meese regarding the roles of the two jobs. The two men created a document outlining each man’s duties. Baker made sure Meese was satisfied by giving him cabinet-level status, but he assured his own authority by building in his ability to almost always have the last word with the president.