“Being in the Cabinet changed [Baker’s] image in Washington. People now understood that Jim Baker was not just a political practitioner — a guy who made the train run on time — but he was a guy who could actually preside over an arena of policy.”

In 1985, tax reform was the top priority for the Reagan administration. But reforming the tax code wouldn’t be easy. Baker, the new secretary of the treasury, would need to create a bill that both Republicans and Democrats on the Hill could stand behind.

Baker started by reaching out to Democratic Representative Dan Rostenkowski. As the powerful chair of the House Ways and Means Committee, Rostenkowski knew the tax code inside and out. It took months of negotiation, but finally he and Baker were able to settle on a plan that might satisfy both parties. The plan offered Republicans lower tax rates, while promising Democrats a fairer tax system. Congressional Democrats agreed to get behind the plan, but House Republicans complained that Baker had given away too many concessions. Conservative Republicans organized to fight Baker’s tax reform program. But Baker had the president’s ear.

“I ended up talking directly to the president,” Baker remembers. “And saying, ‘You know, you really need to do this, Mr. President. If you don’t tell House Republicans to vote for this, your number one domestic priority for your second term is dead. It’s a big defeat for you.”

With Reagan’s help, the tax reform bill passed. It had taken more than a year of negotiations, but Baker and Rostenkowski had managed to craft a bill on which both parties could agree. Baker’s reputation as a coalition builder was solidified.

In this activity, students use a cost-benefit analysis activity to move through the process of making real-life choices. This process helps them to develop an understanding of the influence of positive and negative incentives on their decisions. 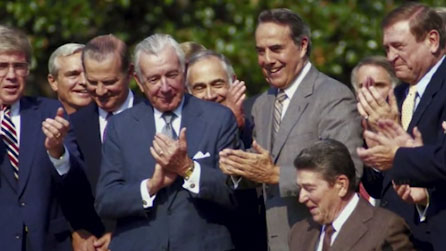