No man is an island. This quote from the English poet John Donne succinctly describes the political role of the president of the United States. As leader of a country as large and diverse as the United States, the U.S. president is often faced with competing goals and policies, both foreign and domestic. For a president to implement policies and achieve goals, the president needs to have advisors who are savvy political tacticians, coalition builders, and masters of negotiation. James A. Baker served in these roles to several American presidents. James Baker applied his skills of negotiation and compromise to achieve presidential goals, both internationally and domestically. Because of his expertise, his opinions are still sought out today by both the press and political leaders. The educational activities that accompany the James A. Baker website and documentary give students a “behind the scenes” look at politics in America and what it takes to “make Washington work.” 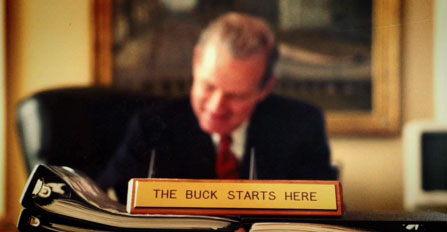 As secretary of the treasury, Baker mastered the artful balance of ‘give and take.’

>> James Baker — Coalition Builder
This activity examines the process of coalition building and has students apply this process to solving a local issue.

>> James Baker — Master of Negotiations
In this activity, students use a cost-benefit analysis activity to move through the process of making real-life choices. This process helps them to develop an understanding of the influence of positive and negative incentives on their decisions.

>> James Baker and End of Cold War
Using primary and secondary sources, students conduct an historical investigation and develop an explanation for the social, political and economic factors that caused the end of the Cold War.

Negotiation Workshop is a series of lessons developed for this website by the Center for Dispute Resolution at the University of Maryland Francis King Carey School of Law (C-DRUM) . Teachers can use these lessons with middle school and high school students when teaching negotiation and problem-solving skills. The workshop includes 22 lessons on discrete negotiation and problem-solving skills integrating examples from the life and career of James Baker. The lessons begin with basic skills and gradually build upon each other, concluding with a lesson involving a simulated public-policy negotiation. The lessons are designed to build the capacity of students to effectively communicate and advocate for their viewpoints.

As the life of James Baker demonstrates, the ability to strategically address conflict and problem-solve is a skill. The workshop breaks down these kinds of skills into various lessons, using situations and topics relevant to middle and high schools students. The lessons also provide a forum for teachers to integrate communication skills into the classroom.

Each student activity addresses the National Council for the Social Studies’ College, Career, and Civic (C3) Life Standards for Dimension Two – Civic and Political Institutions and History. The activities provide students with authentic and relevant information to assist them in understanding the American political process and foreign policy decisions. Each activity also provides opportunities for students to present their findings to their classmates, addressing C3 Dimension Four Standards - Communicating Conclusions. The Cold War Historical Investigation addresses the C3 Dimension One Standards through students asking questions and conducting an historical inquiry.

The teacher is able to differentiate student activities with the UDL-designed website. Short closed-captioned video clips address the different ability levels within the classroom. The learning activities provide scaffolding opportunities such as teacher modeling, guided practice and independent work. Student activities utilize graphic organizers to assist students in organizing, understanding and using the information gained from the website and teaching activities. The teacher can modify student graphic organizers to meet student-learning needs. (Word documents of the graphic organizers appear on teacher versions of the activities.) The number of articles or documents can be reduced for students with reading or processing difficulties. Student activities are interactive and engaging, providing students with choices of performance products and various ways to demonstrate their mastery of skills and content. The Coalition Builder activity provides students with an opportunity to work collaboratively with their peers and to develop collaboration skills necessary for the workplace.