In 1968, after 14 years of marriage, tragedy struck the Baker household: Mary Stuart was diagnosed with inflammatory breast cancer. Fifteen and a half months later she died, and Jim Baker became a widower, faced with raising four young boys on his own.

Baker sank into such grief after Mary’s death that his friends began to worry about him. One day, his tennis partner George H. W. Bush called to ask for his help: Bush was planning to run for one of Texas’ senate seats. Would Baker help run the campaign? Baker said yes. “It was so typical George Bush,” Baker later recalled. “Here was a friend in trouble, a friend who was suffering. And he asked me to [help run his campaign]. I didn’t know a … thing about politics!”

Bush lost that senate campaign, but Baker got his first taste of politics and was hooked. He also began to rebuild his life. He started dating a friend of Mary’s named Susan Winston, a divorced mother of three. In 1973, Baker and Winston married, forming a household of nine – two adults and seven children. Later they would add another daughter to their family.

The taste of politics remained with Baker, serving as undersecretary of commerce for Republican President Gerald Ford. In the presidential primary of 1976, Ford faced a tough challenge from California Governor Ronald Reagan. Going into the Republican National Convention that summer, it was unclear which man would win the party’s nomination. Baker, the master negotiator, sprang into action. He went to work securing votes for Ford on the convention floor. When the votes were counted, Ford won the nomination, and Baker earned the nickname of Washington’s “Miracle Man.”

Gerald Ford ultimately lost his presidential bid to Democratic challenger Jimmy Carter, and the Miracle Man returned to Houston. But Baker had caught the political bug. He decided to run for the position of Texas’ attorney general. Baker campaigned hard, but ultimately lost. It was his first and last time as a candidate.

Though Bush enjoyed some early success in the primaries, as the primary season wore on, it became clear that he was unlikely to defeat Reagan for the party’s nomination. But Baker was thinking ahead -- if Bush couldn’t be the presidential candidate, perhaps he could be Reagan’s running mate. On the eve of the California primary, Baker made a strategic decision to leak the news that the Bush campaign was out of money. Bush was furious; Baker’s leak effectively ended his presidential bid. But in the long run, Bush was also grateful to his friend. Baker had set in motion the possibility that Reagan would pick Bush to be his vice president. At the Republican National Convention in July 1980, Reagan called Bush, asking him to be his vice presidential running mate. Baker’s plan had worked. In the November general election, the Reagan/Bush team was elected into the White House with a landslide. James Baker would be heading back to Washington.

Over the years, Baker played pivotal roles in several presidential campaigns. Learn what role he played in the 2000 Bush/Gore presidential election. 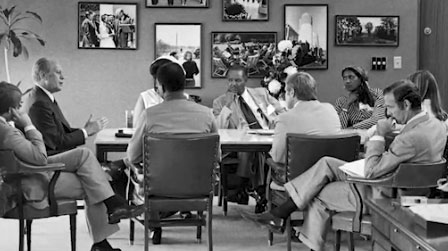 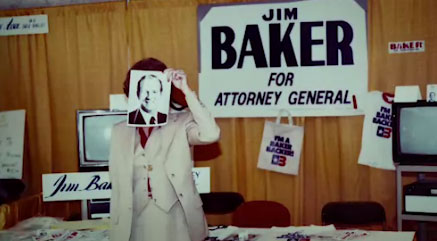 Jim Baker ran for Texas attorney general. It was the first and last time Baker was a political candidate.