Born in 1930 into a family of power and privilege, James Baker seemed destined to be a lawyer. Both his grandfather and his father were prominent Houston attorneys, and Baker followed in the family tradition. He graduated with a history degree from Princeton in 1952. Then, after a stint in the Marines followed by law school, Jim Baker did what three generations of Baker men had done before him. He, too, became a Houston lawyer.

As a young corporate attorney in a city booming with money from the oil and gas industry, Baker negotiated a wide variety of business agreements — and perfected the deal-making skills that would serve him so well throughout his career. “I think negotiating skills are people skills,” Baker would later say. “A lot of it is people-to-people stuff.”

Still, the man who would one day run three presidential campaigns showed no political aspirations. Perhaps that is because he was told from an early age to avoid politics.

His grandfather, Captain James Addison Baker, advised young lawyers to “work hard, study and keep out of politics.” His grandson Jimmy heeded his words — at least in his early years.

While at Princeton, Baker met Mary Stuart McHenry, whom he later married. He and Mary had four sons together and led a busy life in Houston. Among their friends were an oilman named George H. W. Bush and his wife Barbara. Baker and Bush shared much in common: Both were the well-educated sons of very powerful fathers, and both enjoyed competing on the tennis court. But the two men diverged when it came to politics. While Bush was the son of a Republican senator, Baker was largely apolitical. Bush’s wife Barbara later recalled that Baker did not vote because voting day coincided with the first day of the hunting season. 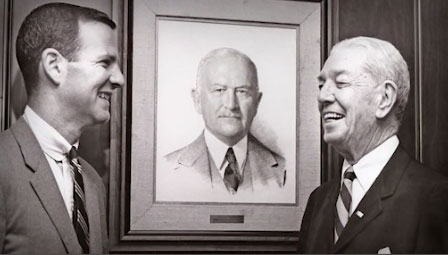 Jim Baker began his career as a Houston lawyer, following three generations of what Baker men had done before him.